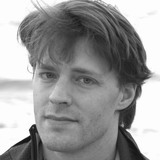 Foto: Jan van Loh
Andreas Liebmann was born in Zurich in 1972, he trained as an actor at the Theatre Academy of Zurich (now called ZHDK). He has worked as an author and performer at the HAU and the Sophiensaele in Berlin, as well as in theatres in Zurich, Stuttgart and Copenhagen amongst others. Since 2015, he has been teaching at the theatre academy in Copenhagen. He lives there and in Zurich.