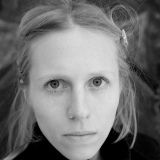 Sophie Anna Reyer was born in Vienna in 1984. She studied German literature in Vienna, composition at the Music University in Graz as well as Dramatic Writing at uniT. Since 1009, she has been an editor for the literary magazine Lichtungen.
She published her poetry in books and magazines. IN 2008 her novel Baby Blue Eyes was published by Ritterverlag and Vertrocknete Vögel bei Leykam. The author who has been the recipient of a number of awards, lives in Cologne where she studies at the Academy of Media.

Awards:
2007 Literature Award for Young Authors of the City of Grazu
2009 Script Promotion Award of the City of Graz
2009 Austrian State Scholarship
2009 Participation in the Authors‘ Workshop stück/für/stück at the Schauspielhaus Vienna with vogelglück
2011 Authors‘ Workshop at the Burgtheater Vienna with baumleberliebe
2013 Literature Award of Graz