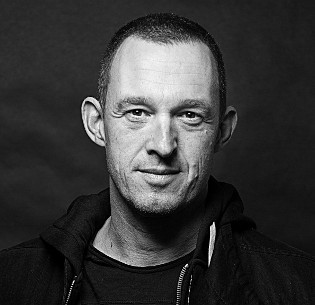 ©Kunstverlust e.V.
Albert Ostermaier, born 1967, lives and works in Munich. In 1988 he begins to publish his first poems and two years later receives his first prize with the literary scholarship of the city of Munich. The play Zwischen zwei Feuern. Tollertopographie, premiered in 1995 at the Bayerisches Staatsschauspiel Munich, marks the beginning of Albert Ostermaier's career as a playwright. He becomes author-in-residence at the Nationaltheater Mannheim, at the Bavarian Staatsschauspiel and at the Vienna Burgtheater. His plays were directed by many renowned directors, including Andrea Breth, Lars Ole Walburg and Martin Kušej.
In addition to his numerous poetry volumes and plays, he has written the novels Zephyr, Black Sun Shines (2011), His Time to Die (2013) and Lenz in Lebanon (2015) since 2008. Most recently, his poetry collection Über die Lippen was published by Suhrkamp Verlag.
Albert Ostermaier is the goalkeeper for the German national authors’ team and curator at the DFB Cultural Foundation. He was "writer in residence" in New York and in recent years has been a guest lecturer at various German universities. As artistic director of various festivals, including the Nibelungen Festival in Worms, Albert Ostermaier has achieved great renown. Among others, he curates the Thomas Bernhard Festival "Verstörungen" in Goldegg/Austria and RYV - RAISE YOUR VOICE, a festival for democracy and diversity in Nuremberg, which will kick off with the founding of the group 2020 in October 2020.