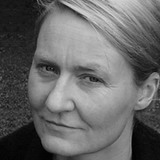 Foto: Peter Walder
Born in 1965, Sabine Harbeke is an author as well as theatre and film director. She studied Visual Communication in Luzern/Switzerland and Film Direction in New York. From 2000 to 2003 Harbeke staged four world premieres of her own plays at the Theater Neumarkt in Zurich: wünschen hilft, schnee im april, der himmel ist weiss und lustgarten. In 2004 she directed her German-English play und jetzt/and now at the Thalia Theater in Hamburg. Her play nachts ist es anders, written for the festival Frankfurter Positionen, received three productions in the season of 2006/2007 at the Nationaltheater Mannheim, the theatres of Bern and Basel in Switzerland. Basel commissioned her to write two plays in the following seasons: mundschutz was premiered in April 2008, jetzt und alles in April 2009. For the Theater Kiel she wrote and directed two plays: schonzeit in 2006 and 11° windstill in 2009. Since 2009 she has been head of the directors’ class at the Zurich Academy of the Arts.