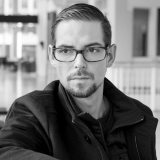 Foto: Jessica Schaefer
Simon Paul Schneider, born in Duisburg in 1980, was nurse, graffiti artist, painted and varnisher and director of short films before he began studying set and costume design at the Mozarteum in Salzburg. During the course, he changed to the stage direction class and finished his studies with a staging of Hermes in der Stadt by Lothar Trolle. From 2010 to 2013, he worked as assistant director at the State Theatre of Braunschweig where he directed several plays. In the season of 2014/15 he took part in the Authors’ Studio of the Schauspiel Frankfurt together with Gerhild Steinbuch and Bonn Park. During this time, he wrote the refugee play Vom Fischer und seiner Frau which was premiered very successfully at the Frankfurt theatre in the direction of Laura Linnenbaum.