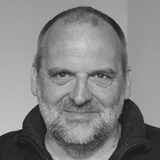 Ulrich Zaum was born in Wuppertal in 1954. He studied theatre, German literature and History in Cologne. Subsequently, he worked as a dramaturg in Wuppertal and Tübingen and then as an editor of radio plays for the state radio WDR. He began writing stage plays in 1987. Many of them have been produced by important theatres, such as Tür und Tor at the Thalia Theater Hamburg in 1991, Der Glöckner von Notre Dame at the Bayerisches Staatsschauspiel Munich in 1996, and most recently, Himmelsleiter at the Hans-Otto-Theater Potsdam in 2005. Ulrich Zaum also writes film scripts.