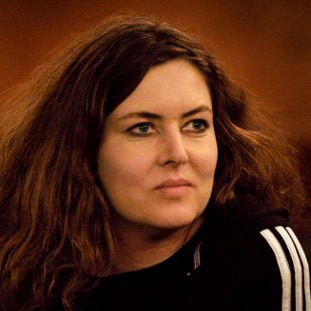 Foto: Barbara Braun/drama-berlin
Born in Elmshorn in 1969, Gesine Danckwart grew up in the country near Lübeck. She worked in theatres in Vienna, Mülheim and Berlin, studied drama and founded an off-theatre in Berlin. Her plays have been premiered at theatres in Berlin, Zürich, Vienna, Hamburg and Hannover amongst others, they have received numerous productions abroad and a number of them have been produced as radio plays.
For the Hebbeltheater she staged her research project Soll:Bruchstelle in 2005 and Auto in 2009. In 2006 she wrote and directed Und morgen steh ich auf at the Maxim Gorki Theater in Berlin. At the Nationaltheater Mannheim she recently realised two projects which took place in the public sphere: the tram project Müller fährt and Und die Welt steht still in Mannheim harbour.