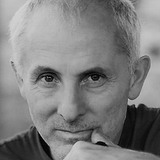 Herbert Achternbusch was born in 1938 in Munich and grew up with his grandmother in the Bavarian Forest. After leaving school, he studied painting at the Academy of Fine Arts in Nuremberg, followed by diverse activities such as working as a cigarette vendor at the Oktoberfest. He published numerous books and produced a large number of films in the following decades. He received several prizes, such as the Ludwig-Thoma-Medaille of the city of Munich and the Petrarca Prize (which he refused in 1977). For his play Der Stiefel und sein Socken which was premiered at the Munich Kammerspiele in December 1993 under his own direction, he received the Mülheim Dramatists’ Prize for Best Play for the second time in 1994. His novel Hundstage was published in the spring of 1995 by S. Fischer Verlag, his film Hades was selected for the official competition of the Berlin Film Festival in 1995.
Herbert Achternbusch lives in Munich.