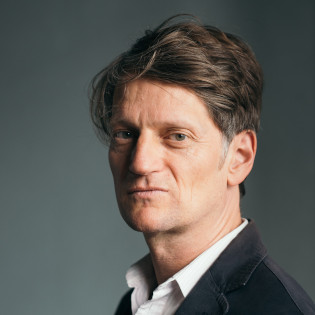 Foto: Dominik Zietlow
Gerhard Meister, born in 1967, grew up in Emmental, Switzerland, and now lives in Zurich. He writes theatre and radio plays as well as spoken-word-texts which he performs himself. After graduating in History and Sociology in 1995, he wrote and performed in his first play. In collaboration with Andreas Lutz he founded the stage project Geholten Stühle which quickly gained national attention and won the Salzburger Stier (prestigious German cabaret award) in 2000. Meister has been commissioned to write plays for theatres in Zurich and Stuttgart amongst others. His plays have been performed in Bern, Vienna as well many other theatres in Switzerland and abroad. He received the literature prizes of the city and the canton of Berne as well as residency scholarships to New York, Berlin and Elba. Since 2004, he has been a member of the spoken-word ensemble Bern ist überall. In 2011 his collected spoken-word texts were published (Viicher & Vegetarier)