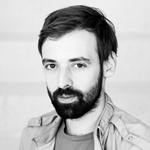 Foto: Annemone Taake
Stefan Hornbach was born in Speyer in 1986. After studying Theatre, Psychology and German literature in Munich, he studied acting at the Academy of Dramatic Arts Baden Württemberg in Ludwigsburg. As an author, he was finalist in the open mike competition in Berlin in 2013 and in the authors’ competition of the theatres of St. Gallen and Konstanz in 2015. Also in 2015, he won the Osnabrück Dramatists’ Prize with his play Über meine Leiche. With this play, he was invited to the Heidelberg Theatre’s play competition in 2016 as well as to the Dramatists’ Festival of the Deutsches Theater Berlin where it was shown in a preview performance of the Burgtheater Vienna. The play was premiered at the Osnabrück theatre, followed by the Burgtheater production and one at the Schauspielhaus Bochum. He has received a scholarship by the Kunststiftung Baden-Württemberg for his projected novel, he also received the young authors’ prize of the Schiller Memorial Prize of the state of Baden-Württemberg. As an actor he has performed in theatres in Stuttgart and Heidelberg.
For the play development YOU’RE JUST JEALOUS he won the audience prize at the Young Authors’ Festival at the Drachengasse Theatre in Vienna together with Magdalena Fischer and Sophie Utikal. Since 2013, he has been a member of the theatre and film collective KOLLEKTIV EINS.