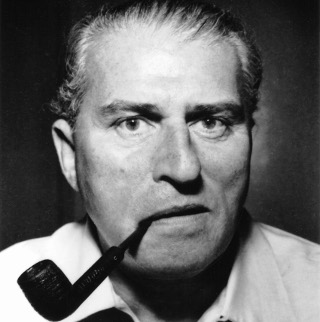 Foto: Archiv S. Fischer Verlag
Carl Zuckmayer was born in Nackenheim at the Rhine in 1896. After finishing school in Mainz, he volunteered for military service and was moved to the Western front. In 1918, he shortly began studying humanities and sciences in Frankfurt and Heidelberg; the friends he made in this time were more important to him than theoretical knowledge. In 1920, he went to Berlin. His first plays were not successful even though they gave him literary legitimacy. The breakthrough happened in 1925 with Der fröhliche Weinberg which also gained him the Kleist Prize. In 1933, the Nazi regime banned his plays from the stage. With his family, he withdrew first to Austria where he had owned a house since 1926, in 1938 he fled to Switzerland, a year later he emigrated to the USA where he lived as a farmer in Vermont till 1946. Between 1947 and 1957 he mover between Switzerland and the US; in 1958 he finally returned to Switzerland, settled down in Saas-Fee and became a Swiss citizen in 1966. When he died in 1977, he had been one of the most successful German authors for decades.