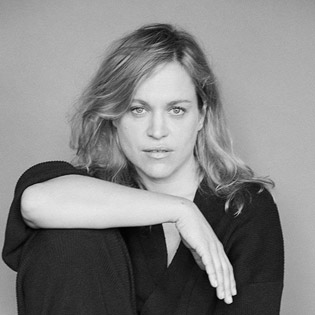 © Rafaela Pröll
Anne Haug, born in Basel, studied acting at the University of the Arts in Berlin. In 2007 and 2008, she received the Acting Study Prize from Migros-Kulturprozent and the Ernst Göhner Foundation. During her studies she acted in various productions at the Deutsches Theater in Berlin and the Maxim Gorki Theater Berlin. There she worked with René Pollesch and Viktor Bodó, among others. After an engagement at the Theaterhaus Jena, she has been working as an actress and author for theatre and film in Germany and Switzerland since 2011. After the leading role in the multiple award-winning feature film Men show women their breasts by Isabell Šuba, she now works in arthouse film and television productions throughout the German-speaking world. Anne Haug writes for the theatre and as a screenwriter for cinema, TV and the web. Since 2013, she has been producing a theatre series with her duo "Projekt Schooriil" in the Sophiensaele Berlin. This series was invited to the Theatertreffen in 2019. In the same year, she wrote her first play Neverland for the Thalia Theater Hamburg together with Antú Romero Nunes. From the 2020/21 season onwards, Anne Haug will be a member of the ensemble and, as part of the Stücklabor, author-in-residence at Theater Basel.