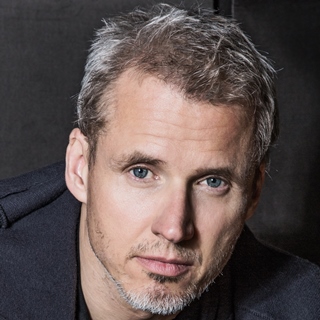 ©Esra Rotthoff
Falk Richter (*1969, Hamburg) is considered one of the most important contemporary theater directors and playwrights. Since 1994 he has worked at many renowned national and international theaters such as the Deutsches Schauspielhaus Hamburg, Schauspielhaus Zürich, Schauspiel Frankfurt, Schaubühne Berlin, Maxim Gorki Theater, Hamburg State Opera, Nationaltheater Oslo, Toneelgroep Amsterdam, Théâtre National de Bruxelles, Ruhrtriennale, Salzburg Festival and the Festival d'Avignon. His most famous and successful texts include GOD IS A DJ, ELECTRONIC CTY, UNTER EIS and TRUST. His pieces, which are highly topical, are available in more than 30 languages and are performed worldwide. In recent years he has increasingly developed free projects based on his own texts together with an ensemble of actors, musicians and dancers. With choreographer Anouk van Dijk he developed several dance theater projects, which in their special combination of text, dance and music founded a new aesthetic form. Their joint productions NOTHING HURTS, TRUST, PROTECT ME, RAUSCH and COMPLEXITY OF BELONGING have toured with great international success. In 2013, he won the Friedrich Luft Prize for his music-dance-theater production FOR THE DISCONNECTED CHILD, which premiered at the Schaubühne Berlin in cooperation with the Staatsoper in the Schillertheater. In 2014 he celebrated a highly acclaimed premiere with his piece SMALL TOWN BOY at the Maxim Gorki Theater and founded his collaboration with choreographer Nir de Volff at the Schaubühne with the production NEVER FOREVER. In August 2018, Richter was voted "Director of the Year" in the critics' survey conducted by the trade journal Theater heute for his production of Elfriede Jelinek's AM KÖNIGSWEG. In 2020, he was nominated for the Mülheim Drama Prize with his celebrated production IN MY ROOM, which he directed at the Maxim Gorki Theater. Richter teaches directing as a visiting professor at the renowned Ernst Busch School in Berlin and has been in-house director at the Munich Kammerspiele since the 2020/2021 season, where his most recent collaboration with Anouk van Dijk with TOUCH ensured a brilliant start to the new directorship.
www.falkrichter.com