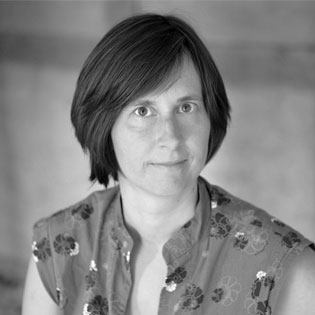 © Jürgen Bauer
Born in Salzburg in 1971, Kathrin Röggla has lived in Berlin since 1992. She studied German literature and journalism in Salzburg and Berlin. In Salzburg she staged plays and performance events before turning her focus to writing. She has been writing radio plays (including collaboration with the internet radio collective convextv) since 1998, and plays for the theater since 2001. She has received numerous awards, including the award for the SWR Best-List (2004), the Bruno Kreisky Award for the Political Book (2004), the Solothurn Literature Award and the International Art Award of Salzburg (2005). She has published two books of experimental short prose: niemand lacht rückwärts (no one laughs backwards, 1995) and Irres Wetter (Wild weather, 2000), a book of reportage from New York in the month following September 11, really ground zero (2001), two novels, abrauschen (downrushing, 1997), wir schlafen nicht (2004 - published at ariadne press we never sleep, 2009), disaster awareness fair, a book of two essays, and, in collaboration with the visual artist Oliver Grajewski tokio, rückwärtstagebuch (2009), and, most recently die alarmbereiten (2010).
She has also written numerous radio and theater plays (e.g. fake reports or junk space for the theatre festival “steirischer herbst” in collaboration with Neumarkttheater Zurich) draußen tobt die dunkelziffer for the Volkstheater in Vienna in collaboration with the “Wiener Festwochen”, worst case and die beteiligten, which has been invited to play at the Mülheimer Theatertage in 2010. She lives in Berlin .

Else Lasker-Schüler-Dramatikpreis 2022 an Kathrin Röggla