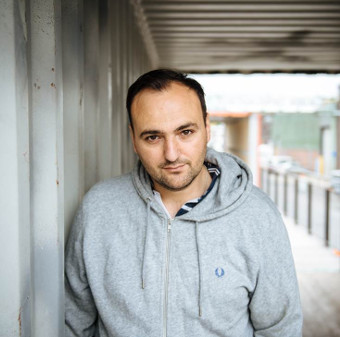 © Costa Belibasakis
Nuran David Calis was born in Bielefeld in 1976 as the son of Armenian-Jewish immigrants from Turkey. He studied directing at the Otto-Falckenberg-School in Munich from 1996 to 2000. During this time he worked as assistant director at the Kammerspiele Munich and the Schauspielhaus Zurich. In 2003 his first play Dog Eat Dog – Raus aus Baumheide was premiered during the Autorentheatertage at the Thalia Theater in Hamburg. Since then he has regularly staged his own plays: Urbanstories at the Schauspiel Hannover, Homestories – Geschichten aus der Heimat, Café Europa and Schwarz at the Schauspiel Essen and Einer von uns at the Thalia Theater in Hamburg. He also directed other productions at the Schauspiel Hannover (Spring Awakening, Intrigue and Love) and at the Volkstheater in Vienna (The Robbers, Macbeth). In 2006 Calis received the Bavarian Award for the Promotion of the Arts, in the same year his production of Schiller’s >em>The Robbers gained him the Nestroy Award as Best Emerging Director and for his production of Homestories he received the Federal Award “Soziale Stadt”. Apart from his work in the theatre, Calis wrote and directed his first cinema movie in 2007: Meine Mutter, mein Bruder und ich!.